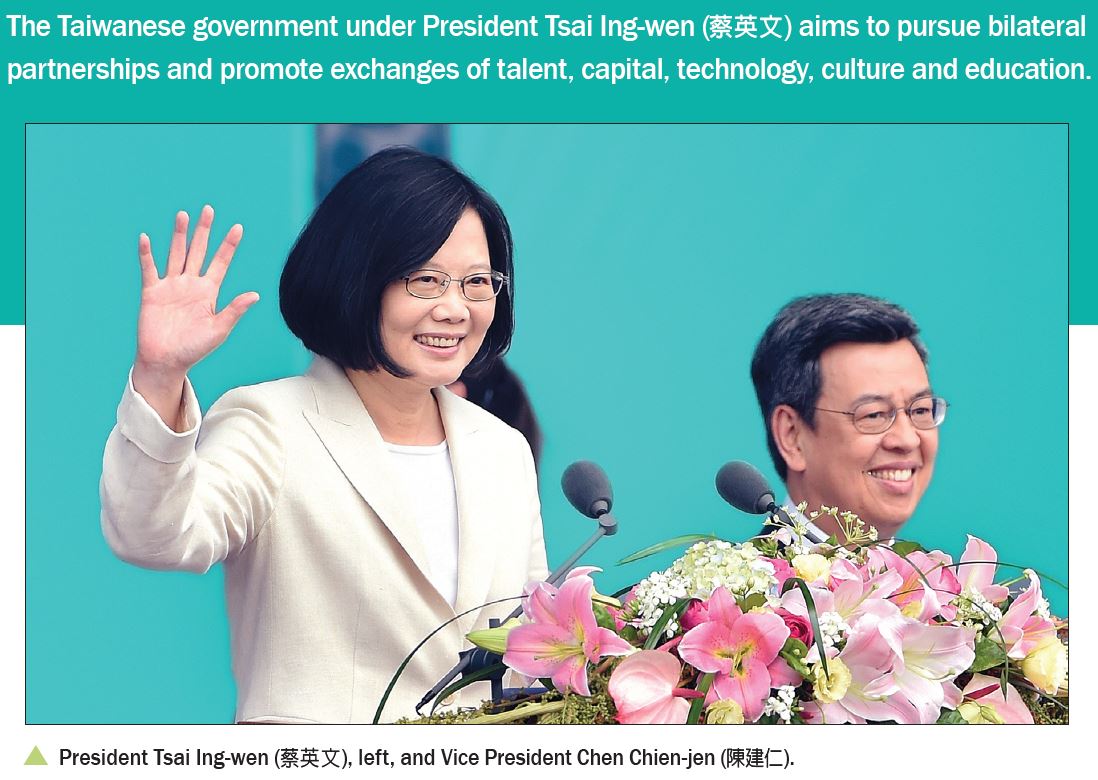 The New Southbound Policy is a crucial part of Taiwan’s economic and trade strategy in the face of increasing regional economic integration as well as new challenges and business opportunities linked to the integration trend. Taiwan is an integral member of the Asia-Pacific family and has participated extensively in the global value chain of popular technology products. It is keen to share its experience and know-how in this as well as other areas.

“The goal of the New Southbound Policy is simple and clear,” according to Minister Without Portfolio and Office of Trade Negotiations head John Deng (鄧振中). Under the New Southbound Policy initiative, Taiwan intends to engage in a wide range of negotiations and dialogue with 18 countries: Singapore, Thailand, the Philippines, Indonesia, Malaysia, Vietnam, Laos, Myanmar, Cambodia, and Brunei in Southeast Asia; India, Pakistan, Bangladesh, Sri Lanka, Nepal, and Bhutan in South Asia; as well as New Zealand and Australia. The partnership is aimed at achieving multifaceted cooperation and establishing mutual prosperity, the minister said.

The initiative does not seek to advance Taiwan’s geopolitical stature or influence, but intends for Taiwan to play a proactive role in the region by expanding and enhancing trade cooperation with neighboring countries through resource sharing and people-to-people exchanges, says Minister Deng, whose Office of Trade Negotiations has been tasked with coordinating implementation of the policy. Emerging markets in the Association of Southeast Asian Nations (ASEAN) and South Asian countries have seen rapid economic growth as a result of structural changes in the global supply chain. In recent years, the 10-member Southeast Asian trade bloc has evolved into Taiwan’s second-largest export market and investment destination. However, with a population of 1.7 billion and combined GDP growth of 7.4 percent in the next five years, the South Asian market demands equal attention. Rather than viewing ASEAN and South Asia as mere manufacturing bases as had been the case in the past, the Taiwanese government under President Tsai Ing-wen (蔡英文) aims to pursue bilateral partnerships and promote exchanges of talent, capital, technology, culture and education. The government has set the ball rolling to forge new partnerships with those countries, connecting with their domestic markets, and cooperating on infrastructure and other construction projects. “Taiwan has considerable expertise and experience in the development of industrial supply chains and is willing to share its knowledge and resources,” Minister Deng says.

Road” initiative, which emphasises on improving regional infrastructure — with a focus on people, the New Southbound Policy intends to support tourism, education, medical, technology, small and medium enterprises, and agriculture in the ASEAN markets and South Asia.

For further information, please check the attachment below.